I recently found a group on LinkedIn intended to name and shame companies that pay unacceptable translation rates. The group’s name literally contains the words “unacceptable translation rates” and “shaming” in it, so one would think that the people who join the group are like-minded human beings who are unplugged (or trying to unplug) from the Matrix, and who believe translators deserve, at least, living wages. Well, one would be wrong.

The first thing I see is a thread denouncing a certain company that allegedly pays US$5 for 500 words, i.e. $0.01/word or (for anyone with a standard daily output of 2500-3000 words per day, that’s a grand total of $25 to $30 little peanuts for a hard day’s work). One would expect to read cries of outrage and well-founded criticism of such rates. Again, one would be wrong; for the bottom feeders and exploiters of the commodities market have their knights, several of whom fought to the death defending notions like:

If you’re located in a geographical area where conversion rates work in your favor, there is no reason not to work for such rates.

Where? Where I ask thee, oh shiny knight, is this magical land where one can afford a decent living with $25-$30 a day. According to one knight, that magical land over yonder is Portugal, a country with a gross domestic product per capita of US$21,733.07. I wonder where this knight learned math…

Ok, it’s low, but only if you respect the law and pay taxes.

Because, apparently, struggling economies don’t struggle enough without adding corruption and tax evasion to the equation.

This one made me weep for the great minds of yore. In my head, I could see everyone from Adam Smith to Ronald Coase rolling over in their graves and doing a triple face palm. (For believers in such fallacies, might I recommend Economics for Dummies? I’ll even pitch in to pay for the book myself.)

These were not their exact works, of course, just the gist of their endless and awfully written efforts to defend the indefensible. After about 80 of such comments and more or less effective rebuttals from other members, I tried to chime in to defend the specialty service segment (a.k.a. “premium market”) with these funny little things called numbers, arguments, and stats (you know 34 billion a year industry and growing = no need to be exploited); but alas, no one cared. By then, the conversation had already taken a turn for the worse in my view, ending in the only place where heated, unfounded discussions end: an intellectual graveyard. Thus, also ending my interest in the thread, but not in the topic altogether.

Being as the forest was, once again, missed for the trees. Here are some questions I think went unanswered:

– Translation is a US$ 34 billion a year market with a 12.17% average yearly GROWTH that is expected to hit US$ 37 billion in 2018. Given the amount of money pouring into translation, why should translators work for peanuts?

– In 2011, Mission Essential Personnel, which was rated #1 in the top 100 language companies, reported over US$ 725 million in revenue; while on the opposite end of that top 100, Intrawelt, reported US$ 4.18 million. Companies in the middle, like Global LT Inc., reported between US$ 12 and 14 million. Given these reported profits, why are translators working for these companies at low rates?

But, of course, answering them would mean using solid, founded and informed arguments, which these knights simply don’t seem to have. 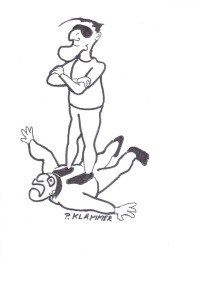 We all know Mr. Chiosso as the bully in translation thanks to his accusation of “slenderer” (sic.) against Aurora Humarán, President of IAPTI, and threats against IAPTI members. If you don’t know what I’m talking about, you can read the article that started the whole thing here, Chiosso’s own rambling on the subject here or a coherent version on Kevin Lossner’s blog here or on NOPeanuts! here. In addition to drawing a lot of negative attention to himself and giving reasonable people (who can actually spell in English!) enough comedy materials to last for a lifetime of Chiosso-jokes, he has also raised an interesting question: Can translators share information about unethical business practices or abusive rates or contractual terms online without committing some form of defamation?

Mr. Chiosso’s insistence on turning this into a “slender” (sic.) case and threatening with unfounded legal action has sparked the question of the legality of such information sharing. As a lawyer with a somewhat dark sense of humor, I could not resist the temptation to both poke fun at Mr. Chiosso (because, let’s face it, he’s asking for it!) and to address the legal question at hand. The answer is simple: Yes! They absolutely can share information online, provided that what is being said is actually true and that they are in a Western Country. (I can’t speak for parts of the world with whose law I am unfamiliar.)

Here’s the thing, the Internet is not regulated at an international level, but freedom of expression is. In addition, most jurisdictions in the West still regulate defamation criminally (though there is an increasing tendency to eliminate said criminal regulation worldwide). Regardless of whether you are in a jurisdiction under the civil law or the common law tradition, for an action to constitute defamation (whether in the form of slander [i.e. spoken defamation] or libel [printed words or images] or other), any damage to the victim’s reputation resulting from that action must be unfounded or untrue.

So, if we went around saying that Mr. Chiosso offers submarket rates and tries to convince linguists to learn as they translate in order to pay them less, and that turned out to be a big fat lie, then we would be committing defamation. However, if there were any truth to that statement, then we would simply be exercising our freedom of expression; which as we all know, is a human right contained in pretty much every major human rights treaty on the planet. Similarly, if Mr. Chiosso went around saying that Ms. Humarán wrote the allegedly defamatory article in question and that turned out to be a lie on his part, then he would be commiting defamation against Ms. Humarán (see how the table turns in the second hypothetical scenario?).

But the issue doesn’t end there. Mr. Chiosso, like Ms. Humarán, happen to be located in Argentina, where international human rights law has been part of the Constitutional “block” since the last Constitutional Amendment in 1994, whereby freedom of expression is an especially protected right (for obvious historical reasons that date back to the last brutal dictatorship). Therefore, as per countless freedom of expression precedents in Argentina (which are not binding for lower courts, but still matter a great deal in litigation) and per several rulings of the United Nations Commission on Human Rights (in the case of Alex Adonis in the Philippines, for example), the criminalization of libel constitutes a violation of the right to freedom of expression under article 19 of the International Covenant on Civil and Political Rights.

In addition, under Argentine constitutional law (article 43 of the Constitution) no person (be it a public authority or private individual) can hinder, jeopardize or threaten the rights and guarantees recognized by the Constitution. What this means is that (unlike under American law, for example, which works a little differently), constitutional rights (like freedom of expression) cannot be hindered by private individuals. So even if Ms. Humarán had written the allegedly defamatory article in question (of which there is no evidence), Mr. Chiosso still wouldn’t be able to do a damn thing about it if the contents of the article turned out to be true, i.e. if he really did incur the actions described in the article.

Whether there is any truth to that is for him to know and the Law to find out, if he really does take this court. However, regardless of the potential outcome of the case, the question here is:

Absolutely! Provided that, to the best of our knowledge and belief, the information we are sharing is true.

1) Avoid character assassination and personal attacks that could potentially constitute bad faith on your end.

2) Make sure you can back everything you are saying up with evidence.

3) If you can’t back it all up with evidence (because, for example, said evidence is not available or easily accessible to you), phrase everything as hypothetical or alleged.

4) Become familiar with freedom of expression laws in your country.

5) Become familiar with your Constitution.

Remember, it took wars and revolutions for the world to figure out that freedom of expression is a fundamental human right. Many brave men and women have given up their liberty and even lives to protect this valuable right. Don’t take it for granted! Honor the human rights heroes of yesterday and today! Exercise your rights and don’t let anyone bully you into withholding true and accurate information that could potentially help fellow translators all over the world avoid scammers and bottom feeders!