Pablo and I just got back from the 56th Annual Conference of the American Translators Association in sunny Miami, Florida. I know, the conference ended a few weeks ago, but it is not every day one flies all the way to the States for a conference. So we took a few extra days off to visit New York and indulge in the art, architecture, pizza, and cheesecake!

This was my first ATA conference and I have absolutely no point of comparison. Even so, I thought the conference was excellent! What I’ve learned about translation conferences is that the atmosphere is usually very positive. This held true for ATA56. The translation world is so diverse that our conferences are more about congeniality and mutual learning and cooperation than they are about competition. At every conference there’s always that rogue translator who just doesn’t get it. But for the most part, one comes across wonderful people with creative ideas, original views, and a lot to share. 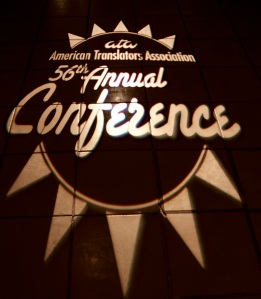 My impression–and I could be wrong, of course, as I have only been a member for about one year– is that the ATA is going out of its way to provide support and guidance to newcomers. Some say the organization has done so in detriment of more experienced translators, but I don’t think that’s true. As an experienced translator, I felt right at home and learned a lot from my colleagues during the conference. I met and exchanged ideas with some of the big names in translation, for whom I feel profound respect, and witnessed for myself just how committed ATA staff and volunteers are to doing their absolute best. Does that mean the ATA is perfect? Of course not. There’s room for improvement, especially when it comes to certain ethical questions concerning agencies and freelancers. But the atmosphere throughout the conference was all about putting our heads together and working towards an organization that provides tools for translators to thrive in their areas of practice and I think that is ultimately what really matters.

The first event I attended was the leadership training, as I will be serving a two year term as Assistant Administrator of the Literary Division, alongside Jesse Tomlinson, our brand new super committed and enthusiastic Administrator. As a first time attendee, the training session was confusing to me for the first few minutes, but once we figured out how the roundtables worked it was as simple as walking up to the roundtable that seemed the most relevant to our division and then just learning from my colleagues and trying to make a positive contribution when I could. I attended that event with friend and former LitDiv Administrator, Mercedes Guhl, whose views and comments were extremely helpful in preparing for my new position. The Literary Division has so much to thank her and Josefina for and now Jesse and I have so much to honor and live up to! At the conference, I finally realized what a marvelous challenge and adventure Jesse and I have embarked ourselves on.

At that event, I think the other person I learned from the most other than Mercedes was Charo Welle from the Spanish Division. Charo is an expert in communication and her expertise really came through in her advice to other divisions. The Spanish division has an incredible blog (a must-read for all Spanish readers!) and their success story was truly inspiring. Who knows? Maybe the literary division will follow suit. But even if we ultimately decide not to start a literary blog, at least I learned several strategies for improving communication and social media within the division.

Another thing I enjoyed was the buddies meet newbies program. My buddy, Catherine Christaki was the best. I know everyone will probably say that about their buddy, but when I say it, it’s actually true. She’s so great she even took on several stray newbies who’d lost their buddies or signed up too late. A highlight of the buddies meet newbies event was listening to Helen Eby, who I later got to chat with repeatedly throughout the conference. I believe Helen to be a sort of never ending source of wisdom and just plain good and reasonable advice. Helen talked about the Saavy Newcomer and invited all division leaders to encourage our division to submit content.

The Book Splash was one of my absolute favorite events. Some of the biggest names in literary translation were there including, of course, Lisa Carter, who is just as cool in person as she is on her blog. I also got to meet our President-Elect Corinne McCay whose blog I’ve been following forever and which has tons of invaluable posts for translators that are looking to break into the direct client scene. And, last but not least, I got to chat with (and get my book signed by) Chris Durban, author of The Prosperous Translator among other admirable achievements you can read about here. My buddy Catherine described Chris as “an industry legend” and she wasn’t kidding. Chris is one of the most well respected translators I know. Everywhere I go in the world, her reputation precedes her and our colleagues have nothing but great things to say about her.

I did not attend as many presentations as I originally intended. Mainly for two reasons: 1) some of the presentations I was interested in overlapped with each other or with my own, and missing my own presentations just didn’t seem right; and 2) it was impossible to get from point A to point B without getting stopped by (and ending up having coffee with) people I found along the way. I am somewhat of a social butterfly and I love coffee, so whenever someone even remotely suggested the idea of grabbing a cup of Joe I was in! I will have to work on that for San Francisco. But I will be blogging about the sessions I did attend in individual posts.

ATA staff and volunteers don’t always get the credit they deserve because most of their work happens behind the scenes. So another highlight of the event for me was meeting Mary David and Jamie Padula in person. A lot of what I like best about the ATA would not be possible without them.

As if all that wasn’t enough, I was honored by an attendee who asked me to be her mentor this year. ATA’s mentoring program is a wonderful initiative that matches a limited amount of people each year. I will of course have a lot more to say about this initiative once the Class of 2016 starts.

As someone who lives all the way down in southernmost country of the American continent, ATA56 meant a huge investment in terms of time and money, but it was absolutely worth it. The conference was an invaluable learning and networking experience. I came back with many new ideas, prospects and opportunities and am extremely excited about the upcoming business year. I wouldn’t miss ATA57 in San Francisco next year for the world! Or any other ATA conference for that matter. I strongly encourage people to go to these conferences and give them a chance. Get to know the people behind the organization. It is an enriching experience on many different levels, even for us first time attendees. 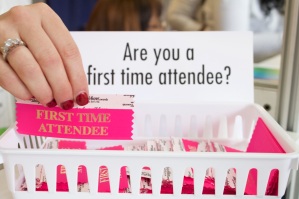 Last week I gave a lecture at the Law School of the University of Palermo on what lawyer linguists do for international organizations, NGOs and governments. My lecture was aimed at advanced translation and law students considering a career in legal linguistics. Not many people know exactly what differentiates a lawyer-linguist from a legal translator. In fact, even within the translation industry, there are lawyers who are also translators who use the term “lawyer-linguist” to describe what they do, even though they are technically legal translators with law degrees (I will explain the difference in future posts).

With that in mind, I thought it would be helpful to explain to my participants exactly what a lawyer-linguist does, as opposed to a legal translator, and to also explain to them where lawyer-linguists come in and how the rules of the translation industry apply to us. For that, I resorted to many industry studies that have been conducted over the past few years, and which have proven very helpful.

When conducting my industry-specific research for my presentation, however, I noticed Latin America was not as present as I would have liked. As someone who lives in Latin America, I was under the impression that there are a great deal of translators on this side of the world and a few lawyer-linguists. The numbers were much smaller than I had anticipated, but at least Latin America had some representation in industry studies.

So off I went, with my PowerPoint and all my numbers to talk to these students about how this career absolutely rocks. I was happy to see some cultural diversity at the lecture and participation from international students. One of these international students was from Angola, Africa. This student was engaging and participative, and a pleasure to have in my lecture. But what this student pointed out was shocking: none of the studies that I had cited included Africa! Seriously, not one!

Slightly embarrassed of what I thought was an oversight on my end, the minute I got home, I went through all these materials again, chart by chart. And guess what I found? I found that industry-specific studies focus on the US, EU, Asia, sometimes Latin America, and “Other.” Africa is alarmingly underrepresented in our industry. I am not qualified to draw conclusions as to the reasons or impact of this underrepresentation. But I am qualified to try to raise awareness and find solutions.

During my lecture, I took note of some of the challenges facing African students who are thinking of pursuing global careers in legal linguistics, translation or both, and am now developing an action plan to do my part as a professor to help. But I think the first step to helping African colleagues or aspiring linguists is to put their needs on our agenda. We need to start talking about this, so we can collectively find ways to help. This student said something I’ve heard a millions times that, I think, is worth repeating: “Africa doesn’t need charity; it needs access to education and equal opportunities.” We need to help put our African colleagues on the map and make tools and resources easily accessible for them to be able to compete for high-paying jobs on the international arena. But first, we need to acknowledge their existence in industry studies!